Charles Caito is a fine art photographer who uses large format cameras and old world techniques to shoot his subjects. Charles primarily likes to work with the Platinum process. 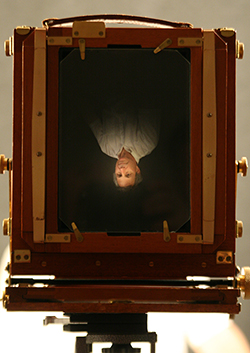 Charles always knew that he wanted to do something creative but when he was ready to choose his career path his parents swayed him into business, assuring him that he’d make a better living in a non-creative field. After several years in business, his interest in photography was rekindled. This interest continued to grow and he realized rather quickly that he liked the large format style of photography.

In 1996 Charles moved to the United Kingdom where he began to teach himself the fundamentals of large format photography. He was able to educate himself on different methods and techniques by purchasing books from used book stores and borrowing a camera from a friend for a week. Though primarily self-taught, he was lucky enough to find willing tutors who gave him the specific technical skills required to produce the photographs he wanted to capture.

Charles has spent several years developing his fine art style and technique. Over these years, his style continues to evolve. While constantly pursuing his love of photography, Charles and his wife split their time between Cleveland, Ohio in the warm weather and Vero Beach, Florida in the colder months.